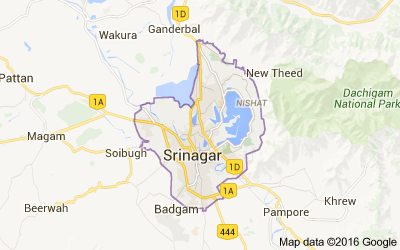 To facilitate the administration, Srinagar district is further divided into 2 Tehsils (Taluka/Tehsil/Tahsil) which are administrative divisions denoting sub-districts. Tehsils consists of multiple villages and a few towns.

Srinagar Data as per Census 2011

As per the Population Census 2011 data, following are some quick facts about Srinagar district.

Schedule Caste (SC) constitutes 0.1% while Schedule Tribe (ST) were 0.7% of total population in Srinagar district of Jammu and Kashmir.

In Srinagar district out of total population, 407,188 were engaged in work activities. 81.2% of workers describe their work as Main Work (Employment or Earning more than 6 Months) while 18.8% were involved in Marginal activity providing livelihood for less than 6 months. Of 407,188 workers engaged in Main Work, 6,602 were cultivators (owner or co-owner) while 6,513 were Agricultural labourers.


Nearby Districts from Srinagar

Below are the list of Districts near Srinagar district in Jammu and Kashmir.